Scared yet?! Spooktober is here and it’s time to grab your pumpkins, buy some fake blood and think about the venue for your Halloween party. No matter how many creepy decorations you buy, you can’t put a price on the atmosphere. So why not (g)host your Halloween party in one of these spooky venues around the UK?

This 13th Century Castle in the Northumberland Countryside is said to be filled to the brim with ghosts, so naturally, it’s perfect for your private Halloween party! Their castle is famed for battles and hauntings. Tennyson even wrote poems about how freaky this place is – so you know it has to be true! They even have a ‘torture chamber’ and ghost tours.. spooky! And the best part?! They have a doggy daycare centre so your pooches can stay safe while you are out hunting for spirits.

2. The Pavilion at the Tower of London

Sitting in the shadow of the Tower of London, this event space is bound to get you in the mood for a fright! The Tower was used for more than 800 years to imprison, torture and execute prisoners. So there are plenty of mischievous spirits dancing around the grounds and this venue is right amongst them. One of the most famous spirits is that of Anne Boleyn, who was beheaded in 1536 for treason against King Henry VIII. She wanders the tower and the grounds carrying her detached head under her arm.

This lovely baroque building definitely has a lot of atmosphere! Nestled just beside Edinburgh Castle, the spooky venue is in their 5th decade of candle-lit corridors, oak-panelled walls and lavishly decorated suits. Whether you want to book out one of the rooms or eat in the lovely restaurant area, it is bound to be a spellbindingly magical experience! The perfect setting for a spooky witching hour party!

Things are often going bump in the night in Gisborough! According to the staff, there have been sightings of three different ghosts in the Hall. But not to worry, even those these spirits might keep you awake with their apparitions and nightly wanderings, they are mostly friendly. This venue is the perfect venue for a relaxed autumn themed dinner party or a private spooky function.

Underground chambers are always super cool, but The Vaults are almost like you have fallen down an Alice in Wonderland style rabbit hole. If you want alternative and different, this is the one! This versatile space located under Waterloo has over  30,000 square feet of tunnels and caverns, waiting to be explored by you and your guests. There are plenty of different sized vaults to choose from and one of them has even been decorated in collaboration with famous graffiti artist Banksy! If you want an entirely unique and creative space that embodies the spirit of London’s bohemian side, take a look at the Vaults.

Do you fancy doing something a bit different? These aren’t spooky venues per say, but they are definitely unique! This charity chain has restaurants in Brixton, Cardiff, High Down and Styal – oh and they’re all in prisons! The charity gives current prisoners the chance to train and gain real work experience while serving their time. A really wholesome and unique experience – oh and you’re helping a charity, of course!

This building has been through a lot! It may have been burnt and ripped down many times, but no matter how many times it is rebuilt the ghosts very much still haunt Renvyle House. One of the most common apparitions is the ghost of a man who appears behind women in the mirror as they are getting ready. If you are looking for a gorgeous venue with a varied history, this is a great option for your ghostly gathering or seance session.

York is said to be one of the most haunted cities in Britain, so naturally, there has to be some haunted venues around! This oldy-timey pub was built in 1503 and is said to have 15 spectres living inside the Inn! There is a function room to hire out if you are interested, but be warned, this place is seriously spooky and was even investigated by the TV show ‘Most Haunted’ in 2005.

This beautiful stately home in the heart of Lancashire has a deep, dark secret. It was built in 1325 as a family manor and has since been a home for witches and ghosts alike! One of the most famous is perhaps the spirit of Dorothy Southworth who died of a broken heart and has been spotted on many occasions wandering the grounds. This could be a great venue for your private Halloween party or your seasonal, classy corporate event. So take a look at their ghost event program or book onto a tour about the witches of Lancashire.

So, you have heard of all of human ghosts, but what about the spirit of an ape? This gorgeous Tudor manor is just outside of Dorchester and was built in 1485. Their most famous ghost is an ape who was brought from the ‘new world’ as a pet for the Martyn household. When the primate became trapped in one of the secret rooms of the house, he perished but the ghost remained. You can still hear him banging on the walls to get out. This is just one of the many ghouls that walk the grounds, so why not check them out!

In Woodchester Park stands this unfinished Gothic Mansion. The beautiful exterior is filled with many incomplete rooms and countless paranormal sightings have been reported here. Will you see the tall man Ghost in the Chapel, the phantom horseman or the floating head in the bathroom? There is only one way to find out! But do be warned… visitors have been attacked by ghosts and locked in various rooms, so this venue isn’t for the faint-hearted. The mansion can be hired out for private and corporate events of up to 180 people, so what are you waiting for? This might be the one!

Was that a traditionally dressed visitor, or the Highland Ghost?! This kilt-wearing spirit is often mistaken for a tour guide before vanishing in front of visitors eyes! But the most famous apparition within this haunted venue is that of the Green Lady, maid to Mary Queen of Scots. The Green Lady saved her queen from a fire and tragically died herself. If you fancy hosting your Halloween banquet in the real home of past Scottish Kings and Queens, this is definitely one to look into!

Said to be one of the oldest pubs in Wales, this Inn has been used as both a courtroom and an execution Hall, where 180 people were hanged. Apparently, you can see the rope marks from the noose, even to this day! If you happen to be near Abergavenny, you should pop in and have an eerie pint.

This London chapel was bombed during the Second World War and has since become a flexible venue space for all sorts of events. The distressed interior of the building and the original stained glass windows make any sort of celebration hauntingly unique. Even though there are no recorded spirits living in the chapel, your guests are still sure to think this place is creepy in its own right!

Built in 1430 by Lord Borthwick, this castle has seen a lot of action. In 1567 Mary Queen of Scots used it as a stronghold from Scottish Noblemen, and the infamous Red Room was said to be where a young servant and her illegitimate Borthwick son were killed for being potential threats to the throne. Priests have even been called in to exorcise the spirits on numerous accounts. This gorgeous Castle can be yours for your private or corporate Halloween party and you can celebrate the 600 years of history along with the festivities.

This 14th Century Manor house is home to the famous ghost Lily of Lumley who was said to be murdered by Priests in the area for her rejection of the Catholic faith. These priests threw her down a well and now the ghost of Lily floats out of the well and still haunts the castle today. If you want some entertainment to further the fun at your freaky fiesta, you can check out their Lily Lumley inspired escape room! Will you make it out alive?!

These venues are not only limited to the spooky season and make great celebration spaces all year round! If you fancy booking one of them for your Halloween party or other events, check out their websites and get your freak on!

So, now you’ve got the venue, you need the entertainment? Or perhaps you want to surprise your guests with a food van?! Don’t worry, we got you! Take a look at the Poptop website to find everything from Acrobats and Fire Eaters to Belly Dancers and Magicians. 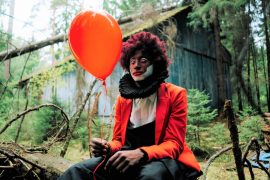 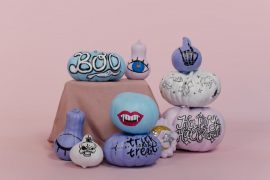 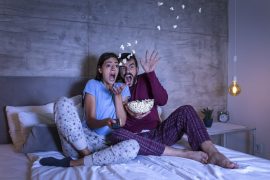