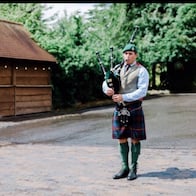 Robert Cunningham is a bagpiper available for hire in the South West of England. 'The Royal Piper' has a wealth of experience and professionalism during his tenure in the military, as the Royal Marines Commando, and a solo bagpiper. He is available as a Scottish bagpiper for a number of special occasions and events. These include weddings, funerals, burns night and much more.

The Royal Piper’s recent commissions include piping with the Royal Marines Band, arguably the best military band in the world. As well as this he was previously a member of the North Devon Pipes and Drums whilst serving as a Royal Marines Commando.

Robert now resides in his hometown of Gloucester, returning once again to the St Andrews Pipe Band of Cheltenham.

The Royal Piper has also accompanied the RM Band Lympstone to Dubai; a very exciting engagement where he played at the 7 star Grand Hyatt as well as the British Embassy in Dubai and Abu Dhabi.

The Royal Piper has also played ;

Looked superb and sounded even better. So glad i had him for my son's wedding. He learnt a new tune for us to accompany bride and father down the aisle- would never know! Would recommend highly

Royals piper was fantastic and certainly enhanced the day.

Robert was fantastic playing at our moms funeral from start to finish. would highly recommend. people commented how good he was. thank you robert from the hunt family 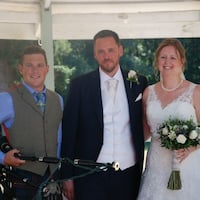 The royal piper, was amazing he played for our wedding and I could not fault him at all, his music was a lovely addition to the day and we had several guests comment on him. We got some photos with him as well which were lovely 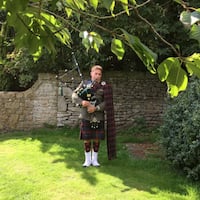 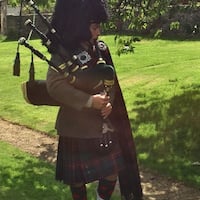 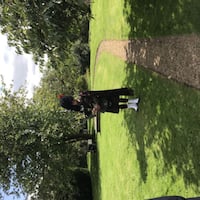 "The whole experience was excellent from finding poptop on the internet, requiring a quote, accepting it and confirming an order and Rob was brilliant he helped make the day very special, all done in less than 5 days - wow - thank you all so much.
Cheers - Jim"

Below is a range of different sets of pieces that can be performed, reasonable requests can be made, given enough notice ahead of the event. Robert can play many more tunes however this is a general overview of popular tunes that will likely be played.

9/8 Marches
The Heights of Dargai
Battle of the Somme