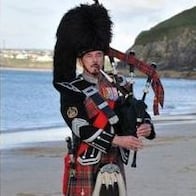 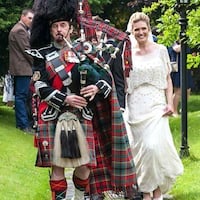 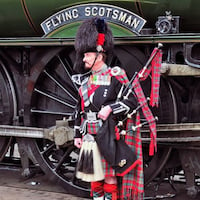 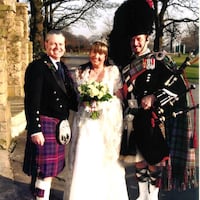 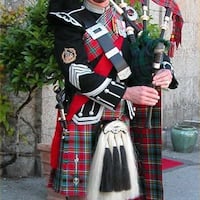 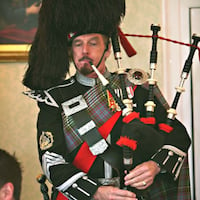 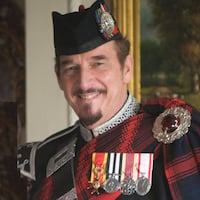 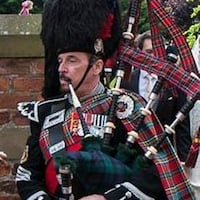 Quality traditional Scottish Piper currently with the "1st Battalion Scots Guards" for weddings, funerals, events, etc., to enhance the ceremonial aspects at important times with the assurance of extensive experience and a real sense of both style and occasion. A Glaswegian now based near Selby, Pipe Major David Waterton-Anderson, KSG, KMM, OLJ, OMLJ, has been developing his extensive skills on the highland bagpipes since he was a seven year old Boy Scout. He has enjoyed a long and varied career playing and competing in pipe bands and also solo which has seen him perform in many countries around the world. Past Pipe Major of the "Pontefract & District Caledonian Pipe Band" who became grade 2 "All England Champions" in 2004. One of only three pipers in the United Kingdom who have been honoured with a State Knighthood and should you be seeking that true sense of Scottish style, tradition and expertise for your special day, David is the man when things need to be "right." 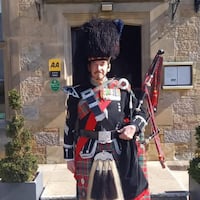 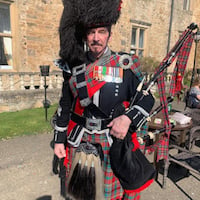 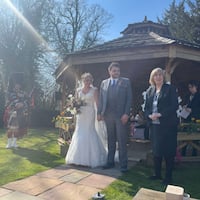 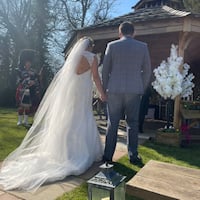 David was absolutely amazing and made my day having him there… waiting for some more professional photos but have a few to share.
Thank you so much!

Piping Scot was the perfect addition to our wedding he was professional, experienced and a very nice guy. Would highly recommend him for any wedding 😊

David piped for my Mums funeral, he piped beautifully, was dressed immaculately and was very respectful. I would highly recommend him and will definitely call upon his service for any future occasions that a piper os needed.

It was very easy to give David a full 5 star ranking! From our initial contact with him through to his performance on our wedding day David was courteous and professional, we simply could not have asked for more from him. On the day itself his wonderful pipe playing, amazing full highland dress and warm personality made him a huge hit with our guests! We also really appreciated his going the extra mile with individual touches such as a Gaelic toast, Selkirk grace and even a greeting in Punjabi!! If you are looking for a piper for your wedding or other event we're confident you would never regret booking David.

David piped at our wedding. David was absolutely fantastic, he was the icing on top of the cake. He wore our family MacLachlan tartan. He piped myself and my Dad into the church, he then piped Jim and I out of the church. Our wedding venue was another hours drive in the opposite direction for David, he rang a few days before the wedding and very kindly offered to drive the extra distance and pipe us into our wedding breakfast. This was truly amazing. David touched so many hearts on our wedding day. I would highly recommend David to anyone! Thank you so much!

Dear David Just a quick note to say thank you so much for your part in our Daughter’s wedding at Irnham Hall Grantham. After a horrible journey down, of which you kept us informed all the way, arriving with 15mins to spare your were absolutely professional and looked fabulous in full dress Your playing was faultless and piping in of the bride and groom and toast was extra special, you were absolutely fantastic. Thank you so very much and would recommend you 100% 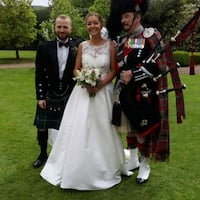 "A super successful surprise for my son's wedding.
Charismatic friendly and engaged with everyone.
His playing was faultless and his piping in of the bride and groom and toast was extra special.
Would highly recommend for any occasion.
Thank you so very much."

"This man was a proffesional and a gentleman who was very knowlegable about bagpiping and scotish tradition. David turned up early, went above and beyond what my father asked and what i expected i recomend david to anyone who wants a quality piper at a very reasonable price. I am so happy with his service!
Kind regards, Aaron."

Piping Scot was amazing! He played brilliantly and was very attentive to detail, He looked fabulous in full dress , He was kind and listened to everything we had to say. PipingScot David also sat with my Father after the funeral and that was worth every penny. Piping Scot was early on arrival and stayed over the 45 mins we booked him for . You will not regret booking this amazing Piper for any event !! Not sure about how you do the ranking from 1-5 , so I am leaving it on 5 because I am hoping that is the highest I can give him .

"Hi David, We just wanted to send a special thank you for helping our wedding day to be the fabulous event that it was. My entrance was a blur and I didn't hear you play too much but the walk out and the breakfast entrance were amazing. Gordon thought you were fantastic and everyone commented on the quality of your playing, the way you looked and you're seamless blend with our guests. A truly memorable day, so thank you.
("

Just a short note to pass on our heartfelt thanks for your piping on Friday 16th March. It turned out just as we had planned and hoped it would. The music would have been loved by Dad. Once again thank you for contribution to a great send off for him."

I'm sorry I missed the chance to personally thank you on the evening. I've received great feedback regarding the evening and I believe a large part is due to your piping and your performance regarding the address to the haggis.
I won't be Entertainments Chairman for next year's Burns Night, but I will ensure your details are provided to my successor so they can keep you in mind.

"Dear David,
Thank you again for attending and piping at our wedding, it made the day even more special! We hope you enjoyed it too. We will send you some photographs as soon as possible. Thanks so much again, it was a pleasure to meet you. John & Catherine Whitson.
(Whitson wedding, St. Ives, Cornwall)"

"Dear David & Neil,
I cannot thank you enough for the extremely precise and professional way that both yourself and Neil prepared for our day and of course exacted such a polished performance. I recall all of the anxieties and the decision making processes in choosing you both and the initial frustrations in not being able to find a Piper of any kind! Fate it would seem played a huge hand with Neil’s wife having her Mother’s Maiden name of Brodie and indeed your own lineage of Dormer. I was quite simply compelled to have you both and could not have possibly wished for any finer support and polish to our big day. Gentlemen, I owe you both a tremendous debt of thanks. The Gaelic recital that you made during your toast at our dining table was absolutely superb David and was quite unexpected. It clearly made a huge impact to the feel of the moment and was extremely well received - didn’t understand a word until the very end though!! Please accept our most sincere and grateful thanks David,
from Mr and Mrs Terry Dormer.
(Dormer wedding, Brodie Castle, Nairn, Moray)"

"Hi David,
We Wanted to thank you so much for playing at our wedding, you were fantastic and we feel you went above and beyond.
Laura & David Brewster.
(Brewster wedding, Sheffield)"

"Hi David,
Just a quick note to say thank you so much for your part in our wedding. Bob and I thought you were absolutely fantastic, as did all our guests - there were so many nice comments from them. You really made our day even more special, we enjoyed it all so much. The whisky ceremony bit was brilliant. Caroline & Bob Smith.
(Smith wedding, Derby)"

"Dear David,
Thank you for making Dad’s 90th birthday so special, not only for Dad, but for his family but also the patients and staff at Red Court. It was exciting to see the awakening response in Dad and how the pipes and your singing made him come alive once more. Something we have not seen for a long time. Many, many thanks.
Deborah Todhunter.
(90th birthday surprise, Red court Nursing Home, Pudsey, West Yorks.)"

"Dear Pipe Major Waterton-Anderson,
Somehow, just saying thank you doesn’t seem like enough. But I hope you know how much your thoughtfulness has meant to us. You truly made our day! It was beautiful, can’t thank you enough. All our love & God bless.
Nicola & Ricardo Martins. (Martins wedding, Goole, East Riding of Yorkshire)"

"David
Thank you for your superb services at our wedding in York, everybody enjoyed it so much, it certainly added to a fantastic day. Thank you again, Michael & Lorraine Blows.
(Blows wedding, York)."

"David!!
Thank you so much for the fabulous piping - everyone loved it & when you made the toast & piped “Happy Birthday” - it made my day : ) Really cool !! Forgot to sort out the “dram” for the toast so have enclosed our ‘favour’ for you - sorry we weren’t more organised, it would have been nice for you to eat with us !! Anyway, thank you again!
Nicci & Chris Frodsham.
(Frodsham wedding, Scarborough, N. Yorks.)."

"David,
Andy and myself just wanted to drop you a quick message to say thank you for the lovely performance you provided for us on Saturday at our wedding. We have had many lovely comments from people who attended on how much they enjoyed it. Thank you once again,
Carolyn Murray.
(Murray wedding, Keavil House Hotel, Crossford, Dunfermline, Fife.)"

Weddings; Funerals; Birthdays; Burns Suppers; ceilidhs; Scottish connection or not, if you value the assurance of tradition on your special day, the pipes can add much prestige and atmosphere.