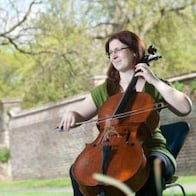 Services From Leonie Adams in London

A violin and cello duo is simple and classic and offers the perfect accompaniment to any special occasion!
From: £350 per event

A beautiful quartet creates a brilliant and classic and offers the perfect accompaniment to any special occasion!
From: £580 per event 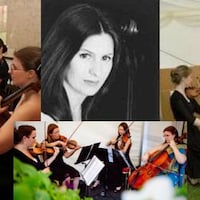 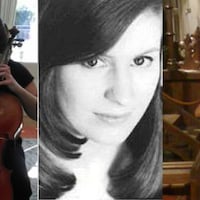 Léonie has performed as Principal Cello with Scottish Opera & the British Philharmonic Orchestra, & Co-Principal with English National Opera & the Philharmonia.
She has also performed in the BBC Proms including on the prestigious First Night as well as playing as a soloist for Her Majesty Queen Elizabeth at Buckingham Palace, recording at Abbey Road & playing with artists including Jason Donovan, Shirley Bassey & Jeff Beck.
Leonie has played live on BBC Radio 3 & as a soloist on Radio New Zealand - sponsored by the British Council & Royal Overseas League.
Léonie was the 'cellist on the Tori Amos musical “The Light Princess” at the National Theatre & deputises on The Lion King in the West End.

A string duo is simple & classic & offers the perfect accompaniment to any event.
We are very experienced in both church & civil ceremonies & can offer music for any part of the day: processional, signing of the register, exit, or simply to provide a musical accompaniment to a drinks ceremony or wedding breakfast.
Our Duo has played at numerous weddings, drinks receptions and corporate events as well as being featured artists on pop recordings.
We provide a professional & sophisticated atmosphere to your business meal or drinks party - with music drawn from a diverse repertoire, our duo provides a performance that is memorable & suited to you.

Founded in 2001, our Quartet trained at the Royal College of Music & Royal Academy of Music in London. We have performed internationally, including at The Royal Albert Hall, Kensington Palace, The Foreign Office, for the Qatar Boat Show, at Lord's & the South African Embassy.
We have played on live television & for royalty, as well as being guest artists on film & pop recordings & at corporate functions, intimate venues, hotel weddings & at the clients home (including the home of the Moroccan Ambassador) & as guest entertainers on cruise ships sailing to Greenland, Iceland, Caribbean, USA, South Africa, Namibia, Senegal & Morocco.

Very professional, charming and delightful lady. Music was enjoyed by all concerned and blended magically with the sounds of nature and the great outdoors. My guests were wonderfully entertained and Leonie certainly made the event special and memorable. Thank you very much Leonie.

The music was excellent and the duo were friendly and relaxed with my family. We organised this fir my Dads 80th birthday lunch and he absolutely loved it. Would definitely recommend.

Léonie was lovely and played beautifully. She arrived on time for my mums 80th as a surprise birthday present., she was delighted and really enjoyed her playing and anecdotes. I would definitely recommend her for any occasion.

I can’t recommend Leonie enough. Their music was perfect for our wedding.

Leonie Adams has excellent work ethics. She arrived early and made sure she knows where she would be playing. I did not have to worry at all. The children loved watching her play at our school's Christmas fair. Thank you Leonie! If you need a reliable and talented musician, you should definitely contact her.

Leonie played beautifully at my father's funeral as part of a duo, and was extremely kind and professional at all times. Highly recommended.