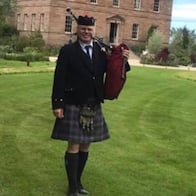 Services From Colin Sutherland - Piper for hire in Newcastle Upon Tyne

I guarantee a beautiful sounding instrument and the best musicianship. If you have a particular favourite tune, let me know and I'll see if I can play it on the pipes at your event.
From: £160 per event 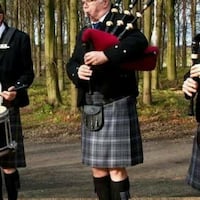 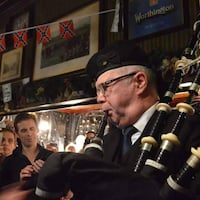 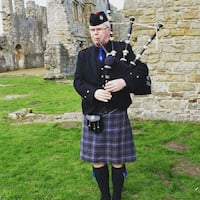 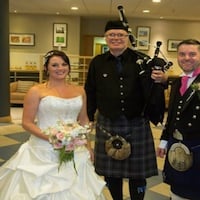 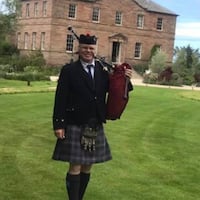 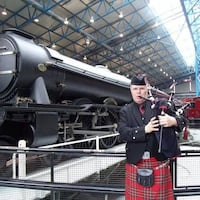 Colin was born in Glasgow, and moved to the North of England a number of years ago. He has been playing the pipes for over twenty five years in various bands, as a solo artist, and also as a session musician. His music has taken him all over the world, to places such as Israel, Australia, Italy, France, Germany, Belgium and Holland, to name a few. He has won several trophies and awards over the years, and played at some big venues around Europe. In the North of England, he has performed at the Sage Gateshead, St James's Park, Alnwick Castle, Hexham Queen's Hall, Sunderland Empire Theatre and Whitley Bay Playhouse.
Colin has played at many weddings and celebrations, and has a wide repertoire of tunes. He is always willing to take on any new tune, and luckily for him, he can 'play by ear', so no tune is out of the question. He takes pride in his music, and will go out of his way to make your special day even more magical and atmospheric. Whether it be playing as guests arrive/emerge or playing smallpipes during the signing of the register.

'I guarantee a beautiful sounding instrument and the best musicianship. If you have a particular favourite tune, let me know and I'll see if I can play it on the pipes at your event. I will even play 'novelty' tunes.'

Colin was fab, pop up is good but needs to accurately get there dates correct for bookings and they didn’t take my date correctly so had to cancel but luckily the supplier was available for my date

Absolutely first class! Brilliant piper, friendly and accommodating. Fitted in with our ideas and requests. Couldn’t have received a better level of service. Thank you! 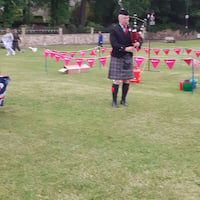 Colin was fantastic at our Beacon lighting Ceremony for the Queens Platinum Jubilee celebrations. He played continuously even in the pouring rain!! He is very professional and kept everyone entertained. Thankyou Colin

I hired coming for my proposal to my partner…..
I can not thank Colin enough! He was not only super responsive but he was helpful with choosing a song and did everything I asked for!! He also looked very smart and well kept with his traditional Scottish attire.

He plays the bag pipes so beautifully and I made the right decision hiring him to help make my occasion even more special!

I'd like to espress my sincere gratitude, appreciation and thankfulness to Colin for the quality of his performance and the kindness, in a very special moment of remembrance. Daniela

He was happy to reschedule following a cancellation due to covid

Colin was excellent and made a very sad day more bearable. Everyone found the experience very moving. He was on time and very smartly dressed. Couldn’t fault him at all

"Colin was very good. He arrived in good time and played as requested very competently.
He helped to make a lovely event a special one.
We had lots of comments from our guests about how lovely it was to have a Piper there and how well he played. Thank you."

"Name: Inga Brown
Organisation: Emotional Wedding
Rating: 10/10
Review:
Colin was just magnificent at our wedding on Saturday. First of all he saved us last minute as our bagpiper cancelled two weeks before the wedding. Our day was a very intimate church wedding and we asked Colin to play Highland Cathedral as we exited the church as it meant a lot to my husband (reminding him of his grandfather who is no longer with us). The vicar made a last minute decision with us to take the wedding party to my mother's grave while Colin was playing. He made that moment so special for us both and for the family and then he managed to uplift everyone's spirits afterwards with his clever choice of songs to follow (including the yellow submarine). It wouldn't have been the same without Colin and his pipes! Thank you so much."

Wedding - 'I was very impressed with Colin's calm handling of the situation and his timing in beginning to play just as they appeared at the church door. Michelle and Andy were surprised and pleased with Colin's piping and as I said earlier it really made their day and it was so special for me to be able to make such an unusual gift to them on their big day. The playing at the church and at the reception was exceptional but the 'piping in' as they came into the wedding breakfast was amazing!... thank you again for taking a late booking and for giving such great service, if anyone is looking for a 'piper' when they book a wedding with me I would be very happy to recommend you!' Sue (Reverend), Sheffield

Most Scottish tunes and anything else on request