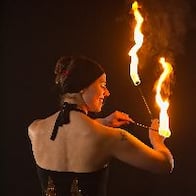 Services From Kat Collett in Bristol

A family-friendly fire show that will have your guests talking for years to come. This show includes toe-tapping routines set to music and daring one-off tricks for the added wow factor!
From: £336 per event

Full of smiles and sparkle, Kat Collett will dazzle you with her skills performing with shining multiple hula hoops
From: £336 per event 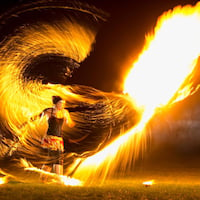 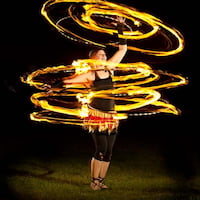 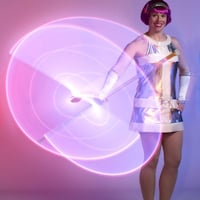 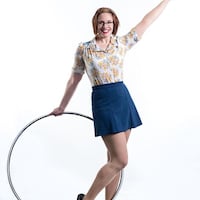 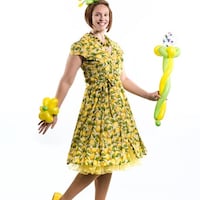 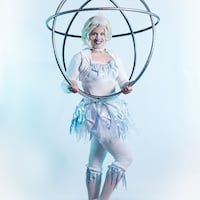 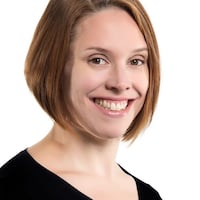 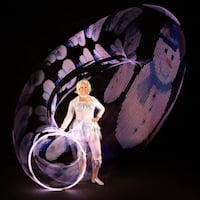 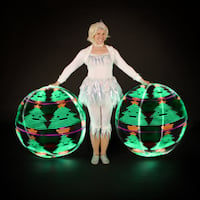 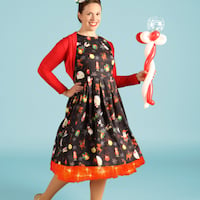 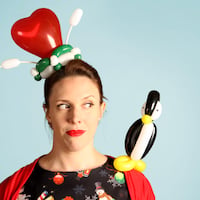 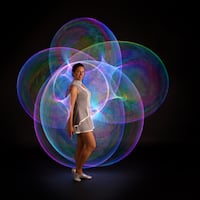 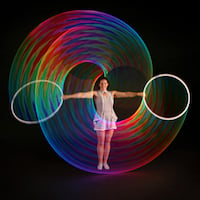 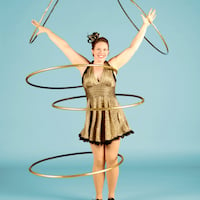 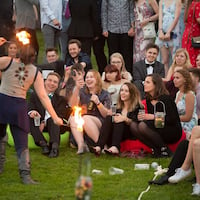 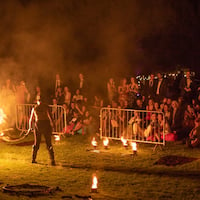 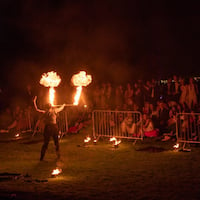 Fire Show Extravaganza!
This family friendly fire show is 20-25 mins long and includes impressive one off tricks such as fire whip and an awesome multiple fire hoop split. The many varied routines are all set to toe tapping music and include fire eating, fire staff, unique fire club swinging, fire hula hoop and wall of fire poi. Has an optional pyrotechnic finale, space dependant and costs an extra £50, this is not included in quote.

2001: Space Shenanigans!
This show is 15-20mins; a tribute to 1960's Sci-Fi using music from the period, a whimsical family friendly show using various different glow props, such as glow poi and glow staff, glow hoop which creates hundreds of different patterns and a multiple glow hoop split for the finale.

Comedy Hoop Act
Set to the 1979 hit single “Boogie Wonderland” by Earth, Wind and Fire; this fun and up beat routine will have your audience both laughing at Kat's antics and amazed at Kat's hula hoop skills. Suitable for all the family.

Ice Queen
For a beautiful Ice Queen look no further! Highly skilled at performing with both single hula hoop and multiple hoops this Ice Queen turns and twists with ease as she entertains at your event. She displays her gracefulness when she performs with a specially made ice staff. Playful and always looking for fun this Ice Queen is totally approachable, she won't put you shivers down your spine!

Kat's Ice Queen can also perform withcutting edge LED hula hoops to bring an added twinkle to your event, as they create patterns and pictures in the air!

Gold Hula Hooper
Full of smiles and sparkle, this gold themed hula hooper will dazzle you with her skills using multiple hula hoops

Kat was fantastic. Really adaptable and engaged brilliantly with the audience. I would definitely recommend her

She was absolutely fantastic, we loved every minute and didn't want it to end! She was extremely professional and has a great personality which made all the difference very calm and great with the kids, thank you kat!!!!

We had Kat perform at our wedding in July because we loved what we saw on her Instagram pages, and we were not disappointed. Easy to work with, and very lovely, she added a little extra magic to our special day and all of our guests are still talking about the fire show! Thanks Kat!

Kat provided an unexpected end to our wedding. Her engaging personality won over our guests both young and old. Kat’s performance was amazing. All of the guests have commented on how much they loved it. I would recommend Kat to add excitement and laughter to any event you may be planning. Thank you Kat!! Jo

Kat was amazing - we hired Kat for our school PTA event, she had all of our children plus parents in awe of her skills - great with the audience, extremely professional and had us laughing - Miranda springs to mind!
Excellent - we will definitely be booking again!!
Thanks Kat :-)

Kat was great fun and kept the audience captivated. She was very funny and talented. Great communication with booking. She definitely has the wow factor.

Kat is amazing. Fun engaging incredible show. Made our party perfect
Highly recommended for all events ( ours was adults only and she engaged the whole audience). Fabulous 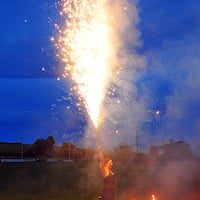 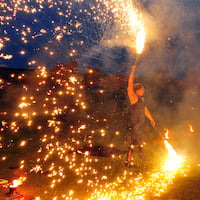 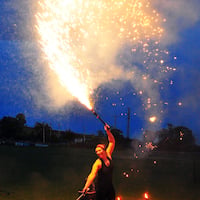 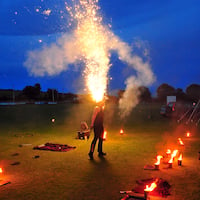 "Kat was a wonderful addition to our party and we were thrilled with her performance. Never having seen her perform before we were not sure what to expect (it was also very cold so we weren't sure people would want to go outside) but Kat's whit and amazing skill held both adults and children's attention alike. People were full of compliments about her that evening and the following day, she was great fun to watch.
All communication with Kat was very straightforward and she helped guide us through the whole experience. Very professional and super talented I would recommend her to anyone wanting to add some fun to their party."

A huge thank you to Kat. She provided a prompt quote, travelled a considerable distance and was completely reliable. We were worried about the rain forecast but she was reassuring at every stage. She performed brilliantly, with expertise, modesty and a huge sense of fun. Our guests also enjoyed her performance immensely, and it made my 50th party very special and memorable. Many thanks, again Kat. You’re a star! Eva & Damien x

Kat is great! Kids loved her, she was very flexible with what we needed and her balloon creations were amazing! Put a smile on a lot of faces!

"Kat performed her brilliant fire show for my 40th birthday party.
She was excellent on every level, professional and easy to work with. As well as being extremely good and very creative at what she does.
We had a real mix of ages from one year olds to grandparents and everyone loved her.
I would definitely recommend Kat for entertainment at any party, she appeals to all ages and produces a fantastic fire performance.
Thank you Kat for a brilliant show!
Rebecca" 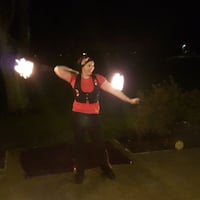 Kat performed at a black tie military event and was fantastic.. a great routine and engaged well with the crowd. From initial booking a few months in advance and throughout the evening in preparing and communication etc.. was so easy, and then her great performance. I didnt realise we would be so close!! I would definately recommend and use Kat again and her fire performance extravaganza.

Kat was amazing, quick to respond to our last minute enquiry and very professional. She puts on a great show! Would highly recommend & we will defiantly be using her again for future Bonfire Night events!

A very big thank you for being such a stunning star at Tomfest. We all loved you....what a feat to entertain three generations simultaneously. Your performance was a talking point immediately afterwards and has been since and was such an unusual and special highlight. One six year old has repeatedly said the ‘Fire show’ was the best bit of his entire weeks holiday in Cornwall! Friends who were unable to join us because of the late notice have been very envious. Thank you for an amazing evening.

Wow! Kat’s fire show had us gripped from the start! It was mesmerising! Kat performed both her Fire Extravaganza show and hula hoop act at our wedding reception. She was so friendly and approachable. Her shows were engaging for both children and adults.

Wow! Kat’s fire show had us gripped from the start! It was mesmerising! Kat performed both her Fire Extravaganza show and hula hoop act at our wedding reception. She was so friendly and approachable. Her shows were engaging for both children and adults.

We booked Kat for our wedding and from start to finish she was really approachable and professional. She found out about our plans and worked her show and timings into our day seamlessly. We were really pleased to have her as part of our wedding, she was great with the little ones who were fascinated, the adults were equally impressed with the show!

Kat provided an unexpected end to our wedding. Her engaging personality won over our guests both young and old. Kat’s performance was amazing. All of the guests have commented on how much they loved it. I would recommend Kat to add excitement and laughter to any event you may be planning. Thank you Kat!! Jo

Having Kat perform at our wedding was an absolutely great addition to our day and a focal point for the evening. The show was great fun and kept everyone - kids and adults- laughing and entertained.

THANK YOU so much for the wonderful display and workshop you ran with us on Saturday. It was a real highlight of the hen do and was absolutely perfect. Thank you Thanks again, Charly

Kat absolutely wowed the guests at our wedding, young and old alike. Her show was spectacular and very funny, and truly helped make our day one to remember. Booking Kat was way more straightforward than we expected it would be, and she was always helpful & communicative when we were deciding exactly what we wanted.

Kat Collett delivered spectacular performances to wow the crowds and was a highlight of our event. Funky, fantastic and (of course) fiery, there’s no-one better!

Kat Collett gave a brilliant performance and the guests were in awe of her skills. She entertained and engaged with the guests performing outside at a Royal Air Force 100 event with over 4,000 people. Her professionalism, her adaptability, and her lovely friendly personality only enhanced what was a wonderful night. I would not hesitate in recommending Kat or having her perform at any future gatherings. Absolutely Brilliant and thank you from the RAF!

Thank you so very much for coming, it 100% made the night special."

Booking Kat was very easy , her show was amazing and was a great start to the evening of our festival style party. Kat had all of our guests young and old captivated with her mesmerising fire show.

We would highly recommend Kat for her excellent entertaining performance, my guests were asking where did you find her and how could we book her. Brilliant, funny, entertaining and outstanding skills.