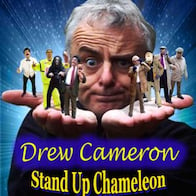 Services From Drew Cameron in London

An Only Fools and Horses Dining Experience and Comedy Tribute Show

Based on the TV show everybody loves-ly jubbly!!! A brilliant homage, full of renditions of your favourite episodes. All your favourite characters in new adventures and mishaps.
From: £1100 per event

Hello. My name is Drew Cameron and I am an AWARD WINNING STAND UP COMEDY IMPRESSIONIST. I can offer you a variety of hysterical performances. Take a look at the videos to see how it all wo...
From: £525 per event 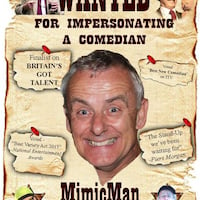 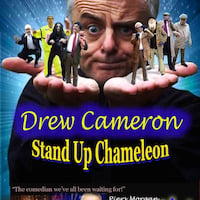 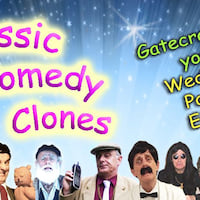 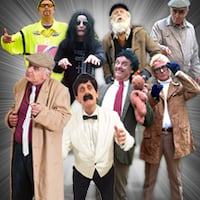 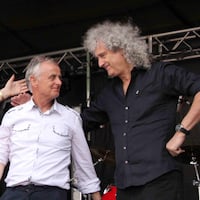 Drew has even been voted 'BEST NEW COMEDIAN ON ITV'

2014 SIR BRIAN MAY chose Drew to compere one of his rock concerts.

TV shows such as the Frank Skinner Show, Dead Ringers and Eggheads.

A woman literally died laughing at one of his shows. It was an honour for him to be asked to perform two weeks later at her wake!

If you're looking to book an original and versatile impressionist, Drew Cameron is suitable for all types of events, from corporate promotions, voice over work, comedy clubs and theme nights through to private events.

Drew also has an extremely successful show, based on the successful TV show ONLY FOOLS & HORSES.

PHONEY FOOLS AND HORSES is a THEATRE SHOW and a 5 STAR COMEDY DINING EXPERIENCE.

A brilliant homage, full of renditions of your favourite episodes.

“Absolutely Mind boggling performance! Must be seen (and heard) to be believed” – Time Out magazine.
“Great confidence, script and impressions. You are the Stand Up we’ve been waiting for!” – Piers Morgan. (Britain’s Got Talent).
Satisfied clients include- Microsoft, Saatchi & Saatchi, Birmingham Mail & Asda.

Laura Hill Berry reviewed Only Foods and Fun – 5 star
12 August 2018 ·
What an absolutely brilliant performance by Drew and the guys for my 40th birthday party; my guests were totally surprised when Del Boy, Rodney and Boycie turned up - even Uncle Albert and Trigger made an appearance! The acts during each course were hilarious and the laughs just kept coming; everyone really enjoyed themselves and I couldn’t recommend this enough if you want a dinner party with a difference, definitely worth every penny!

@MrDrewCameron you were a fabulous compere @WildlifeRocksMe Hope you’ll be there next time!
Julie Singleton

I just wanted to say how much I enjoyed your performance when you supported Joe Longthorne at Cromer Pier. Your impressions were brilliant, some so good that if I had closed my eyes I would have thought the actually people were the theatre.
Well done and thank you for making my evening out so enjoyable.
Carole West March 2014

Drew was very good and every one said he was good .

Drew worked his socks off.. his impressions are spot on!

Booked last minute...thankfully he was available. He was great.

Drew was very helpful and worked with me to get the most out of his act for the night. He was mindful of the audience and everyone really enjoyed his act!

"I thought you were outstanding Thursday night!
A fabulous Compere, and your act was bloody amazing!!!
I’m sure you have been told this many times, but you really are Top Class!!! You made my night!
So I just wanted to thank you….you really raised the roof!!!!"

I myself laughed all the way through, thinking that that was a biased view i needed to know what the other people thought so i went around asking for their views. Their response was far better than i imagined, they all said how good it was which pleased me. So from Joe Jackson and all from Perdiswell Park we would like to say thank you for the entertainment you gave us. Very funny, was enjoyed by everyone. Would recommend Drew Cameron to anyone.

"Thank you so much for your performance at our daughters wedding in Clearwell Castle, Forest of Dean on the 31st May 2014.
You were really funny & went down a storm, especially with Mavis who you had a bit of banter with as she has not stopped talking about you since.
My daughter and new son-in-law loved your performance, as we had booked you to come on as a surprise act before the wedding speeches. You were sensational Drew and although we had all ages there everyone loved you.
I would certainly recommend you to anyone who required a top class entertainer who is a lovely man to boot.
You were brilliant on Egg Heads by the way"

"The night exceeded all our expectations, and the feedback from the punters has been fantastic.
You have been described by everyone as brilliant."

"I just wanted to say how much I enjoyed your performance on Saturday 8th March when you supported Joe Longthorne at Cromer Pier. Your impressions were brilliant, some so good that if I had closed my eyes I would have thought the actually people were the theatre.
The Norfolk people are very reserved and difficult to please, but I found your act funny and original. If ever I see you advertised in North Norfolk again I will be first in line to book my tickets.
Well done and thank you for making my evening out so enjoyable."

45-60 minute stand up set
OR
Unspecified time of mix and mingling as look and soundalike characters, sometimes followed with some stand up.