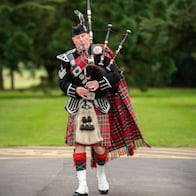 The Wiltshire Piper - The Piper for All Occasions

The Wiltshire Piper - The Piper for All Occasions
(20)

Piper Tony Creates a Magical Touch to Your Event

Having a piper creates a magical touch to your event and will create an atmosphere that your guests will never forget!
From: £160 per event 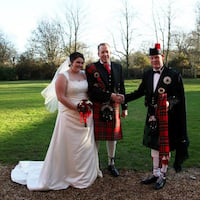 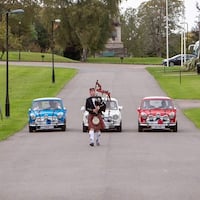 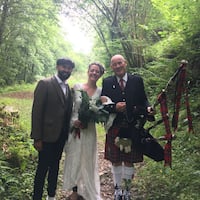 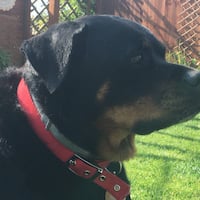 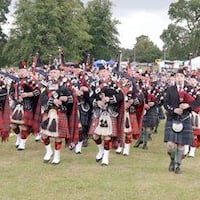 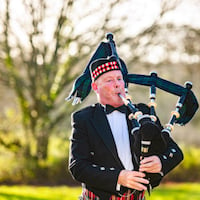 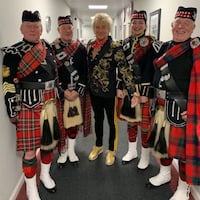 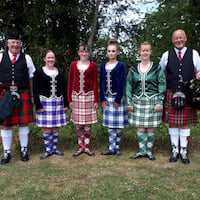 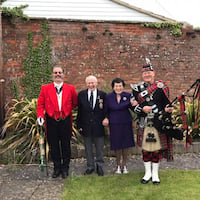 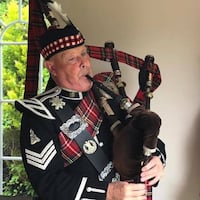 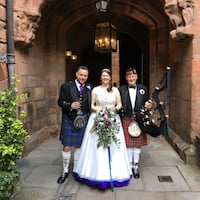 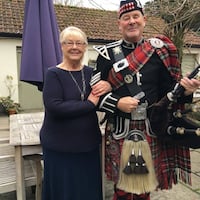 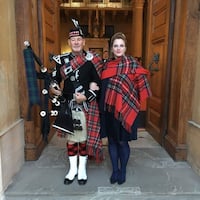 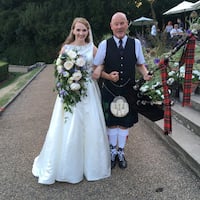 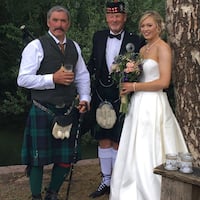 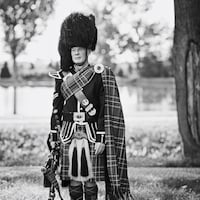 Tony is an accomplished piper and has been playing the Great Highland Bagpipes for 20 plus years. On discharge from the Armed Forces, after 22years service, both Regular and NRPS he attended the piper’s course at the Army School of Bagpipe Music and Highland Drumming, Inchdrewer, House Edinburgh. He went on to be tutored further under the watchful eye of an Ex Scots Guards Pipe Major, prior to launching his professional career. Tony is predominately a solo piper however also manages The Home Counties Pipes & Drums whom are available for larger corporate events, carnivals and fetes and Tony and the team have recently completed 8 stadium tours opening, and on stage with Sir Rod Stewart, members of the band have also played alongside The National Symphony Orchestra with the well-known and respected conductor, Anthony Inglis. The Band is made up of Members located throughout the South therefore subsequently can supply the number of Pipers and Drummers for you, according to your requirements. He and his colleagues will tailor the event to your specific requirements and can advise where needed, on the formal parts of your Event, including if necessary the best way to utilize your piper, or pipe Band to make it an occasion to remember. Tony has two tartans Royal Stewart and Black Watch, his family tartans, and can attend in Formal Ceremonial dress, Day or Evening dress subject to your preference. The Band also have several other additional tartans including Red Robertson and Lamont but Royal Stewart is their Formal Band Tartan All Band members experienced and highly skilled musicians, brought them together through a passion for their hobby and to promote traditional highland bagpipe music and Highland Dancing. The Band are available for large events such as fetes, festivals, parades and promotional launches or smaller events to suit the client’s individual requirements. The band members are located throughout the whole of the south of England from the South West, in Devon to the South East in Kent and North as far as Shropshire Leicestershire, and the Midlands, a majority belonging to pipe bands within their local areas They can travel overseas if required and therefore makes them the one stop place for your occasion from solo piper to full Marching Band and dance group. In the United Kingdom they have previously performed together at many Military, Corporate and celebrity events, Concerts, Weddings, Birthdays, Funerals, Burn's Nights, Birthdays, and TV and Radio presentations. In fact, no matter what your event they can provide a highly professional service, having also performed in many counties in Europe, Russia, Canada and the USA. 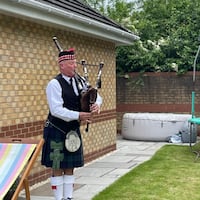 Celebrating in style with a piper was perfect. Very friendly obliging just a joy

I can not explain just how amazing this experience was. Our Nan loves bagpipes and she literally dreamt of having a bagpiper for her birthday. Tony was fabulous, very professional and a genuinely nice guy. He got our family’s warped sense on humour and gave some back which was great. If we ever need a bagpiper in the future he will be our go to (we are even thinking of reasons just to book him again). He played some lovely songs and even tried to learn a new song and gave it his best shot our nan had the best birthday thanks so much! So easy to book too and all communication with Tony was great.

Tony was brilliant, truly brilliant. A genuine man and an excellent piper! True professional with a personal touch. Can not recommend enough. Thank you Tony. 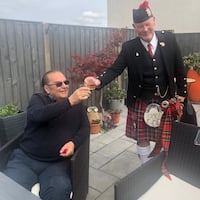 Tony really made my dads 70th birthday very special. He was very accommodating to our needs, and played our favourite requests. Would definitely recommend!

I would thoroughly recommend the Wiltshire Piper. He played for a birthday and we had a great event. Excellent quality and a nice man.

Outstanding. Played for my mothers funeral on a cold, snowy day. Poor chap must have been freezing in his kilt. Was professional at all times and sounded amazing. My mum would have loved it!

A great choice for my husband's funeral, as soon as I heard the pipes, I knew my husband would have loved it. 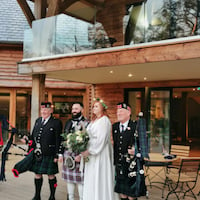 Tony was the best!!!!! He went above and beyond for our wedding. The bagpipes were a surprise I planned for the groom and the wedding party and it was amazing! Not a dry eye in the house.
Everyone is still talking about them and I’m so glad I hired him.

Thanks so much Tony for all your effort and hard work I’m so appreciative!!! Xx

I can highly recommend Tony without any question. Not only was his playing 5* plus but Tony will go above and beyond to make your event as special as he possibly can. Thank you so much for giving my mum a beautiful send off. I couldn't have wished for anything more. Myself and my family would like to say thank you so much. Kindest regards Andrea

Tony was amazing. He did my mums funeral and honestly made the service so much more special. He was in contact straight away listened to what me and dad wanted and advised when needed. Everyone at funeral commented how amazing Tony was. Thank you so much.

It was an extremely enjoyable time and all enjoyed the Wiltshire Piper. I did receive a call during the event to ask for feedback which I think should have waited until the next day or on email rather than interrupting me at the time of the event however we enjoyed the music and my Fathers 85th was made very special due to this.

Tony played for our mum's funeral and he was so professional, he just new where to stand and when to play and made a very sad day memorable.

Turned up on time very professional. He played an excellent variety of music. After the lockdown we would like to have Tony back again for my Mother's birthday meal.

Thankyou so much Tony for your service. Sorry I never got to meet you in person yesterday. Absolutely beautiful music the best bag piper I have ever heard and it made the funeral for my uncle a special one and extra comforting. What a lovely genuine guy goes out of his way to make arrangements and advise what type of tune to have depending on the occasion. Will remember you forever xx

Tony was polite, genuine and professional. A gentleman with fantastic piping skills.

Highly recommend Tony. Not only did he go out of his way to do everything we asked for he has a great personality and was a privilege to have at the wedding. Everyone was very impressed. Thank you Tony

Tony was so easy and efficient to organise everything with over the phone.. plus he was extremely friendly and helpful. He found the venue which was not straightforward and he liaised with the wedding coordinator on the day before the booking. It was wonderful to hear the pipes playing and to see him as we entered the marque. He played a wide variety of tunes and it set a lovely atmosphere as we arrived. He went out of his way to make the experience of having him there as good as possible. MANY thanks.

This Piper recently was our chosen Piper for our Wedding in Wroclaw, Poland. His professionalism over our two day traditional Polish wedding was second to none. We had 100 guests 70 Poles and 30 Brits and throughout both days he was there and interacted with all our guest and have to say he was the star of our wedding. Thank you very much for making our wedding so special we will be booking him for our first anniversary here in the UK

My family and I would like to express our sincere thanks to Tony Hurst who played the pipes and Dads funeral on 6th March 2019. Dad was a side drummer in a pipe band during his service with the RAF during WW2 and beyond and it meant a great deal to the family to honour our father in this way. As such, I would have no hesitation in recommending Tony's services to others who require a piper for any occasion. Sincerely David Graham

I hired Tony to play the bagpipes at a corporate event, a Burns Night Supper, and I was absolutely delighted with every aspect of the service I received. During the planning stages Tony was easy to contact and always responded to my calls and emails quickly - which I really appreciated. I had never planned a Burns Night event before and Tony was helpful and knowledgeable and shared his experience so I could get it right. On the evening itself Tony arrived early, arrived prepared and was incredibly professional, also Tony is incredibly talented, the playing was exquisite and we drew quite the crowd of onlookers from outside the venue and the guests were incredibly impressed. The service I received was beyond any that I could have anticipated I cannot recommend this piper enough, I will absolutely be going to him if we ever need a piper again, without hesitation. Thank you Tony.