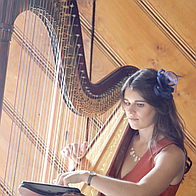 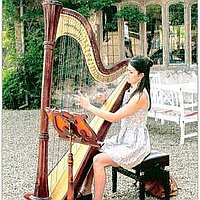 Welsh Harpist Megan Morris is a graduate from the Royal Welsh College of Music and Drama and is much in demand as a solo harpist and chamber musician across the United Kingdom.

Megan received her Bachelor of Music (Hons) in 2015 after studying Harp Performance for 4 years with renowned harpist Caryl Thomas. She also performed in masterclasses with Isabelle Perrin, Alice Giles, Marisa Robles, Chantal Mathieu, Florence Sitruk and Catrin Finch. Megan is a recipient of the Royal Welch Fusiliers Prize (2014), the Most Promising Harpist award at the Urdd National Eisteddfod (2011) and Vale Musician of the Year (2007). She was also a competitor in the International Lyon and Healy Awards in 2013.

Megan has performed at high profile events for clients such as the Welsh Government, National Assembly for Wales, BMW, The Crown Estate and the Cardiff City Football Club.
Most recently, Megan has been performing regularly with her group ElenElectrix with recitals at Richard Branson's 'The Roof Gardens' in Kensington for their 'Proms on the Roof' series (August '17 & May '17) and at The Royal Academy of Arts (July '17).

Other performances include In 2016, Megan performed twice for visiting ministers of the British-Irish Brexit Summit at Hensol Castle and the Senedd. Guests included Arlene Foster and Carwyn Jones.
The previous year, Megan performed on seperate occasions for the Vice Premier of China and the US Ambassador to the United Kingdom during their visits to Cardiff. The same year, she was invited by the Welsh Government to perform for their St David's Day Celebrations at Le Bibliothèque Solvay, Brussels and The Foreign and Commonwealth Office, Westminster. Megan performed for HRH The Duke and Duchess of Cambridge during their visit to Pembrokeshire in 2014 and she also performed for HRH Prince of Wales and the Duchess of Cornwall during their St David's Day visit to Cardiff in 2013.

Megan enjoys her role as a chamber musician and she The Vesta Trio and The Hiraeth Ensemble. She is also the harpist for the electroacoustic group ElenElectrix. Megan accompanies various classical and operatic singers and in 2014 she accompanied tenor Trystan Llyr Griffiths at the House of Lords in Westminster, as well as performing a solo harp piece. The same year she premiered a new commission with mezzo soprano Kerri-Lynne Dietz addressing the former Archbishop of Canterbury, Dr. Rowan Williams.

As an orchestral harpist, Megan's highlights include performing Britten's War Requiem with the RWCMD Chamber Orchestra under the baton of Carlo Rizzi and with baritone Simon Keenlyside CBE. In July 2014, Megan was honoured to play The Planets with the world renowned Cory Band as part of the Deal Festival of Music and the Arts.

Thank you so much Megan, you were just fabulous at our wedding yesterday! We received so many compliments from our guests about your performance - you really elevated the afternoon! We were so impressed with your wide repertoire and you have been so helpful, right from the first contact. We can’t thank you enough and will be recommending your to all of our friends!

Popular
Adele - Make You Feel My Love
Alicia Keys – That’s How Strong My Love Is
Avicii - Wake Me Up
Ben E. King - Stand By Me
Ben Howard - Only Love
Bill Withers - Just The Two Of Us
Birdy - Wings
Bob Marley - Is This Love
Bruno Mars - Marry You
Bruno Mars - When I Was Your Man
Bryan Adams - Everything I Do
Bryan Adams- Heaven
Charlie Puth- See You Again
Charlie Puth - One Call Away
Chris Brown - With You
Christina Perri - Thousand Years
Coldplay - Hymn For The Weekend
David Gray - This Year’s Love
Des’ree - Kissing You
Dolly Parton - Jolene
Ed Sheeran - Perfect
Ed Sheeran - Shape Of You
Ed Sheeran - Thinking Out Loud
Ellie Goulding- How Long Will I Love You
Elton John - Your Song
Elvis Presley –Falling In Love With You
Eva Cassidy - Fields of Gold
Fleetwood Mac - Songbird
Greenday – Time Of Your Life
Jackie Wilson - Higher and Higher
James Arthur - Say You Won't Let Go
Jess Glynne - Rather Be
Joe Cocker - You Are So Beautiful
John Legend - All Of Me
Journey - Don't Stop Believin'
Journey - Faithfully
Luis Fonsi - Despacito
Lionel Richie - Endless Love
Lonestar - Amazed
Louis Armstrong - What a Wonderful World
Nat King Cole - When I Fall In Love
Nina Simone - Feeling Good
Oasis – Half The World Away
Oasis – Wonderwall
Passenger - Let Her Go
Phil Collins - Against All Odds
Phil Collins - Another Day In Paradise
Procol Harum - Whiter Shade of Pale
Stevie Wonder - Isn't She Lovely
Stevie Wonder - For Once in My Life
Shawn Mendes - Stitches
Take That - Greatest Day
The Beatles - Here Comes The Sun
The Beatles - Let It Be
The Beatles - All You Need Is Love
The Carpenters - We’ve Only Just Begun
Toploader - Dancing In The Moonlight
Train - Hey Soul Sister
Van Morrison - Have I Told You Lately
Wet Wet Wet – Love Is All Around Me
Westlife – You Raise Me Up
Whitney Houston –The Greatest Love Of All