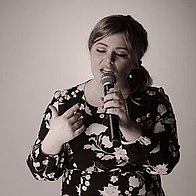 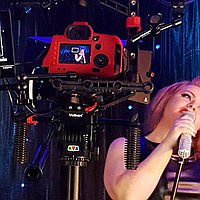 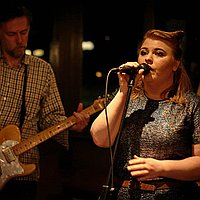 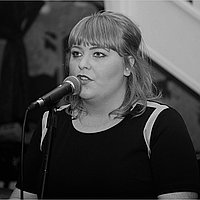 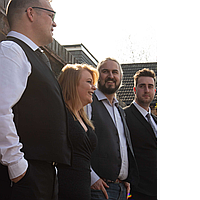 Incredibly talented female vocalist Ginny has performed throughout the UK and abroad offering her versatile vocals and performance to any given occasion. Her impressive range of vocal ability along with a wide variety of genres enables her to create a performance to suit a diverse audience from Rock and Rollers to Beautiful Ballad Babes.

Whilst Ginny is a very sought after vocalist often fronting for numerous bands, she has the stage presence to command an audience weather singing solo, in production shows or performing her Adele tribute show.

Her influences are vast and she enjoys changing the styles of songs to bring a new life to any era from 50’s classics to modern day hits. Whilst Ginny is regarded as an exciting soloist in the midlands she also takes her performance to every area of the UK performing at corporate events, charity functions, care homes, festivals and private parties.

Ginny is also a songwriter and creates a wonderful ballad folk and indie style to her stories when performing her material. Studied Creative and Performing Arts at Liverpool Hope University she is also a trained creative performer. Ginny comes with her complete PA system.

During her studying years Ginny also became involved in Musical Theatre productions and performed in shows such as RENT, LITTLE SHOP OF HORROR and adaptations of SHAKESPEARIAN PLAYS.

Background music played as your guests arrive and take their seats

Song of your choice whilst the bride walks down the isle

A song or music played whilst signing the register

Song choices can be performed live

System available for use for speeches

Music provided whilst your guests arrive
Your chosen song played or performed live for your first dance (also provided for father daughter dance)
Live performance set list provided or chosen by you.
Up to 90 mins of live vocal performance

YOUR DAY YOUR WAY

Female singer along with accompanist guitarist/pianist

Duo performances and or Band option

Having a themed wedding? Soundtracks provided to the theme of your wedding whether it be vocals or background music, for example Pulp fiction, Moulin Rouge, Forest Gump, Chicago, James Bond and many more

FOR A PERSONAL TOUCH